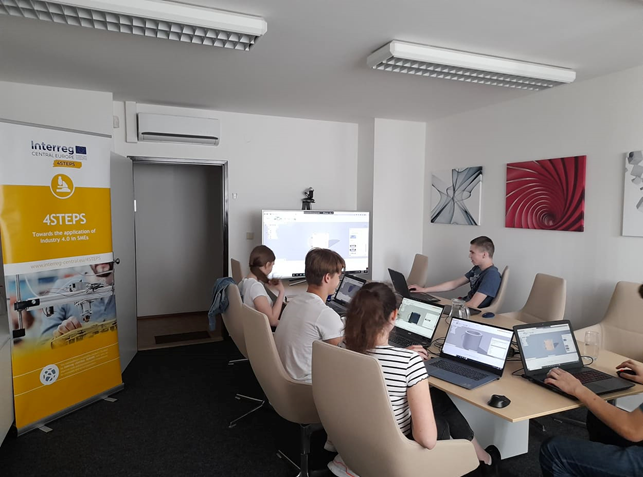 At the end of the school year, we held two workshops that showed students and teachers what 3D printing offers for them and their schools.

Before the holidays, two workshops took place in DEXIC FabLab, one physical and the other virtual. While we met the students in person and during the full-day workshop, we focused on the basics of 3D printing for beginners. The virtual meeting with the teachers was shorter and focused on the possibilities and good practice in the use of 3D printing in schools. As part of the 4STEPS project, which focuses on supporting small and medium-sized enterprises in the transformation to industry 4.0, we have prepared 3 workshops for you on the topic of using 3D printing in small companies. Workshops are free for all participants!

This activity is part of the long-term cooperation of an international partnership, in which we try to support companies in the region and show them the possibilities that technology, in this case, 3D printing, can bring them.

On June 5, we organized the first workshop - Digital Skills for All. This workshop is part of a series of regional workshops for the development of digital skills of various target groups. We had an all-day workshop prepared for the participants, which was divided into several parts, but in addition to the introductory presentation, it was a joint work and the participants actively participated in the workshop throughout the day.
The aim of the workshop was to show students the process of 3D printing from the idea, through the design of their own 3D model to the creation of the final product.

We planned the workshop for teachers at the very end of the school year and took place on June 28. The date was one of the main factors for the implementation of the online workshop. Despite the fact that the situation around Covid was already much better, we decided to hold such a workshop, which will be available to schools from various parts of the Czech Republic.

We opened the workshop mainly for high school teachers because this target group was considered the most suitable for us due to the possibility of a greater impact on their future activities. At the same time, we wanted to allow registration to other people interested in this topic, to whom we also left the possibility of registration.

The workshop for teachers was divided into several sections, in which we focused on good practice in the use of 3D printing in schools. Suitable printer tips for schools, but also 3D modelling. Since we also wanted to satisfy those interested in the workshop, who could not attend due to time constraints, we also created special online teaching materials, which were then sent to those interested and participants as materials for independent teaching. These materials were focused on 3D modelling in the Fusion 360 program, we also focused on the Slicer program and the last video was devoted to independent printer control from the largest printer manufacturer not only in the Czech Republic, Josef Průša.

Both workshops helped us pave the way for 3D printing to new people interested in these technologies, and we believe that they will be part of the teaching in the close future.